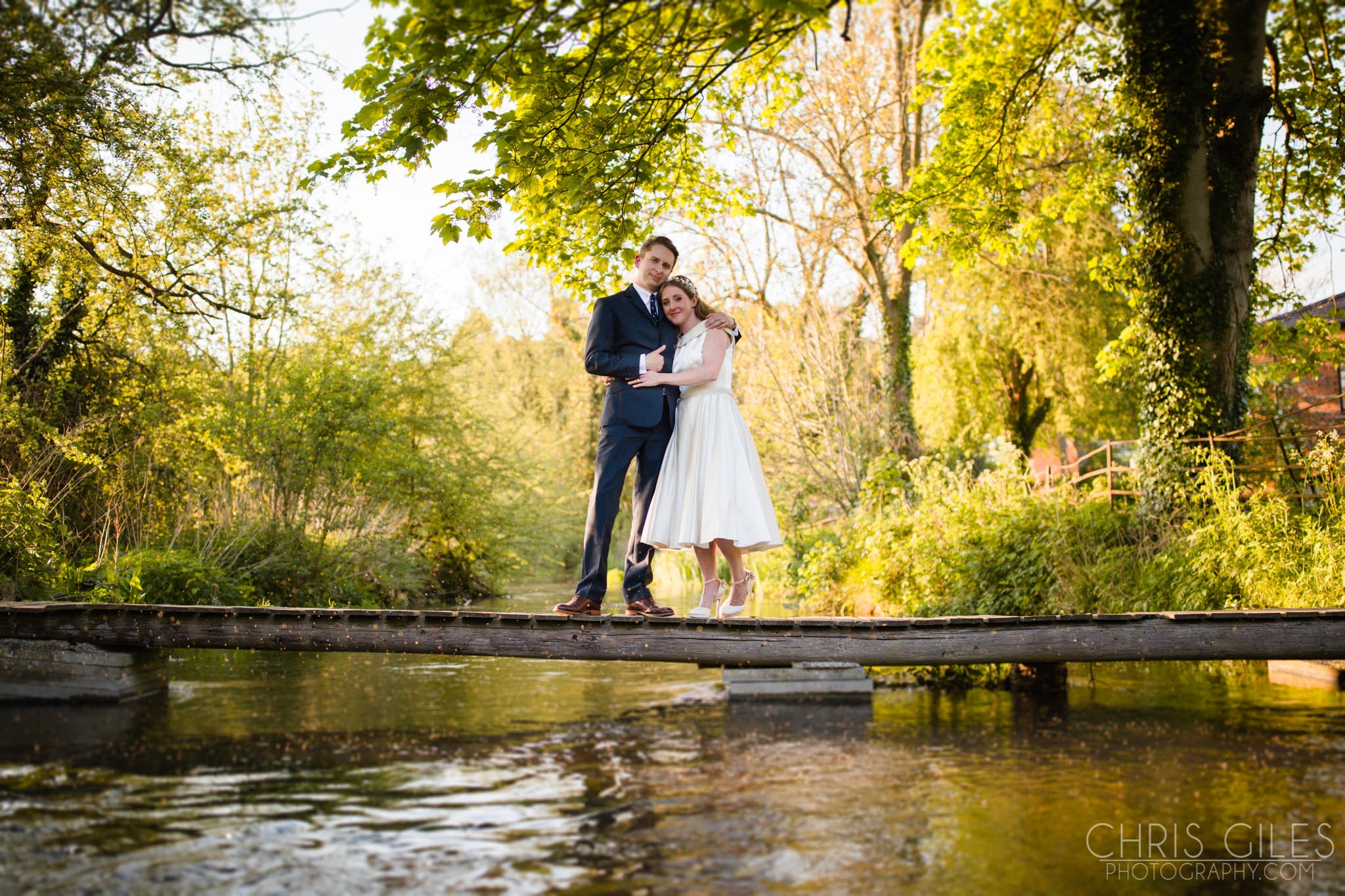 This was my first wedding at Loudwater Farm in Rickmansworth and was the idillic setting for Laura and James’ wedding in May.

It was a lovely warm and sunny day, I started super early wih Laura for prep before heading to Rickmansworth Church where James was waiting.

A lot of the guests arrived via a single decker classic red bus which also took them to Loudwater Farm.

After the I’do’s we headed to the reception and made full use of the grounds. At this time of year everything was in bloom and downright pretty. You’ve the rustic charm of the barn, the river (which is shallow, but very cold) and the trees, ornate hedging and grasses in the backgrond. It’s perfect. The bridge was a lovely spot in particular! 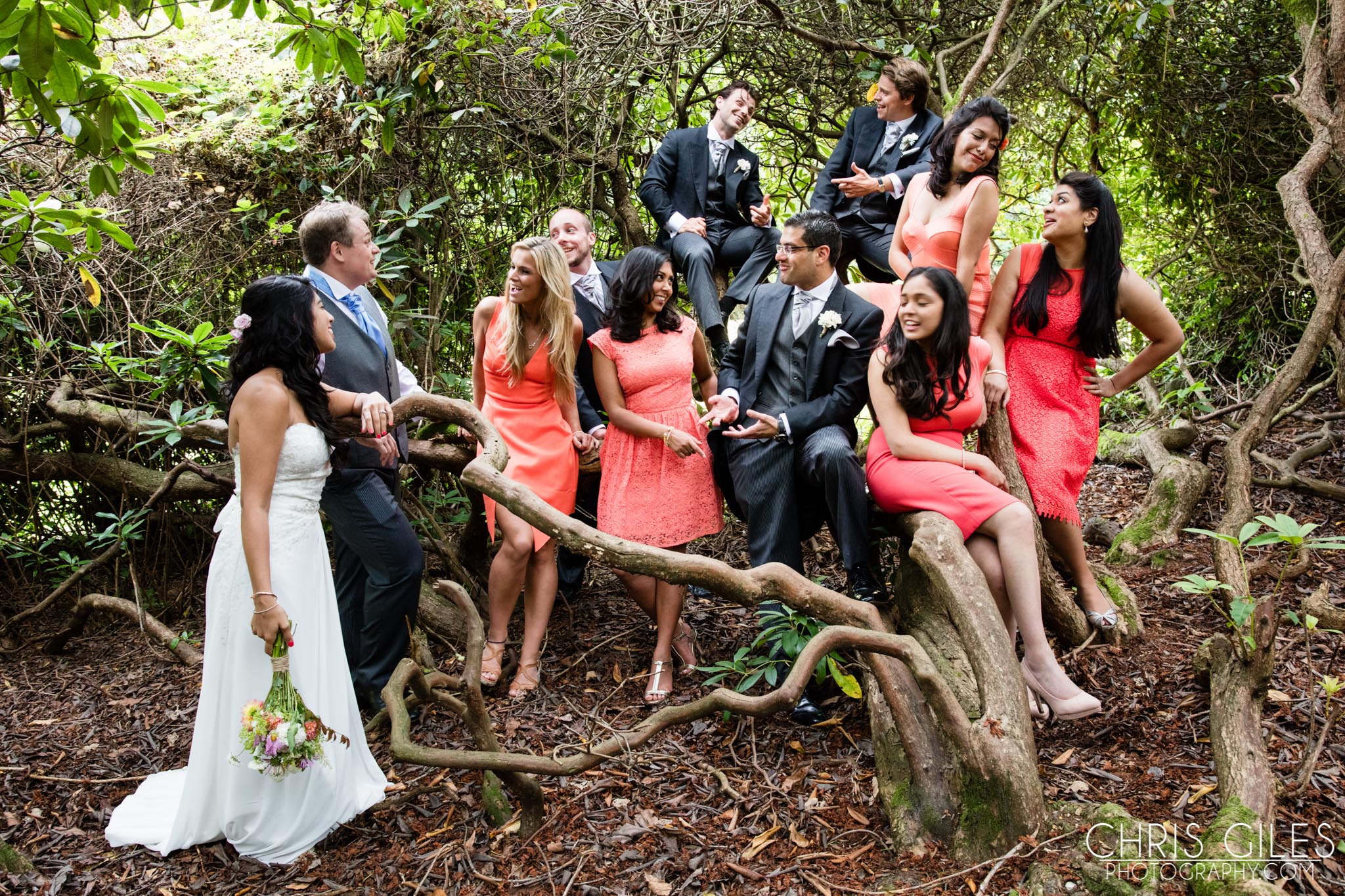 In August I was at Pennyhill Park to shoot Eva and Ollie’s wedding. It was my first time there and it’s a picturesque, sprawling hotel with some beautiful gardens, ornate features everywhere and is a perfect all in one location for a wedding.

I was lucky enough to have Ollie nearby for photos. It’s always good to get both sides of prep, even though with the guys there is less to shoot (the rings, buttonholes, pants, hairy legs etc…. as I sometimes feel the boys can be left behind. It’s their story too. 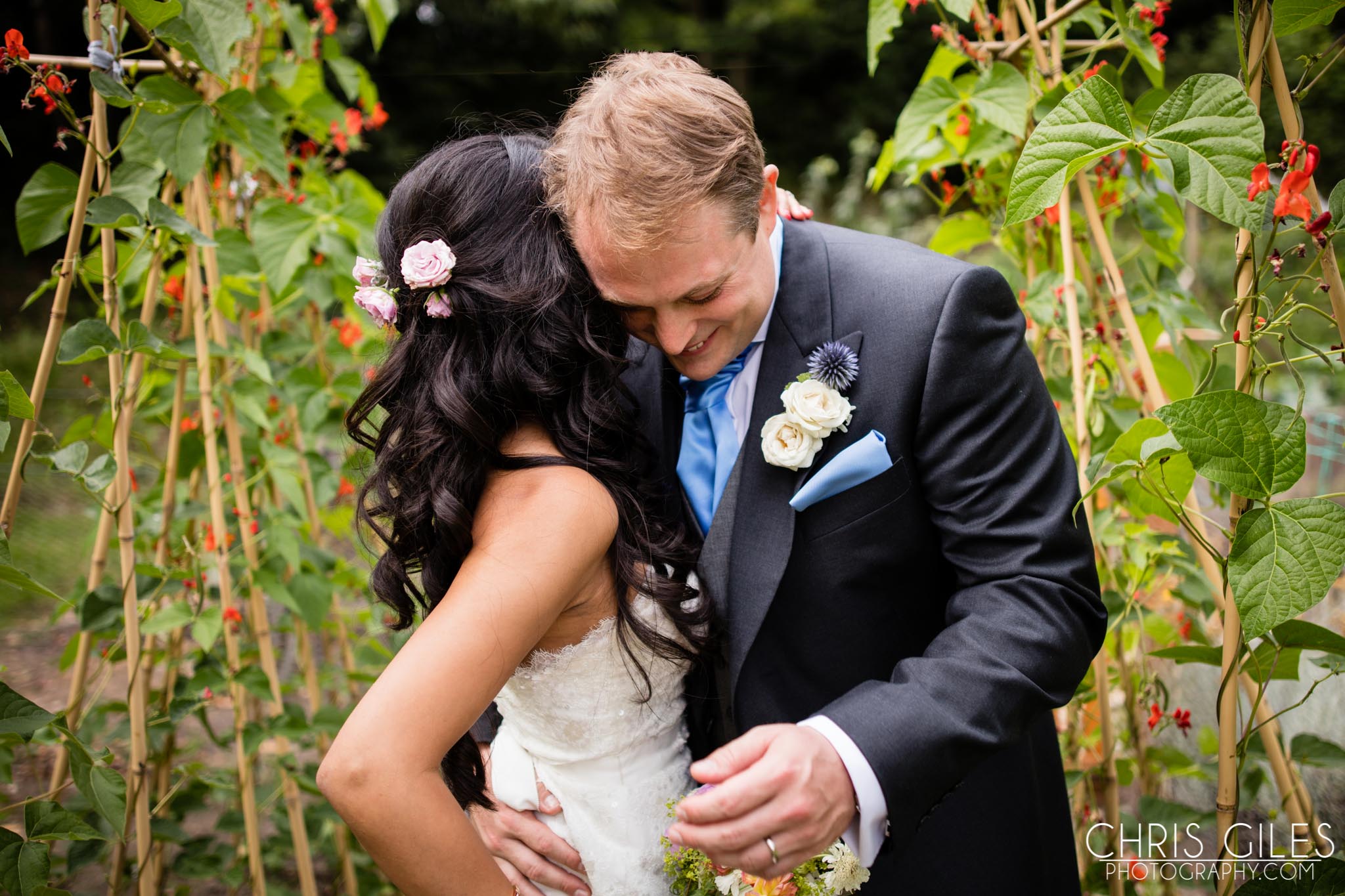 On the brides side, Eva’s prep was a light and happy one, at least until ‘Hairspraygate’ (below)  where super strong hairspray was used to fix the makeup. Which is the wrong sort apparently!

I was there early enough to see the rehearsal too as we had a decent number of flower girls, ushers, bridesmaids and Pennyhill Park has a long walk down to the gazebo.

After the ceremony we had a nice long period of time for the reception. It allowed me plenty of time to get all the shots I could possibly need as well as some cool portraits with the bridal party as well as making good use of the gardens. It was important for Eva and Ollie too as for the last few years they had both been living and working in Australia as doctors which kept them away from family and friends. 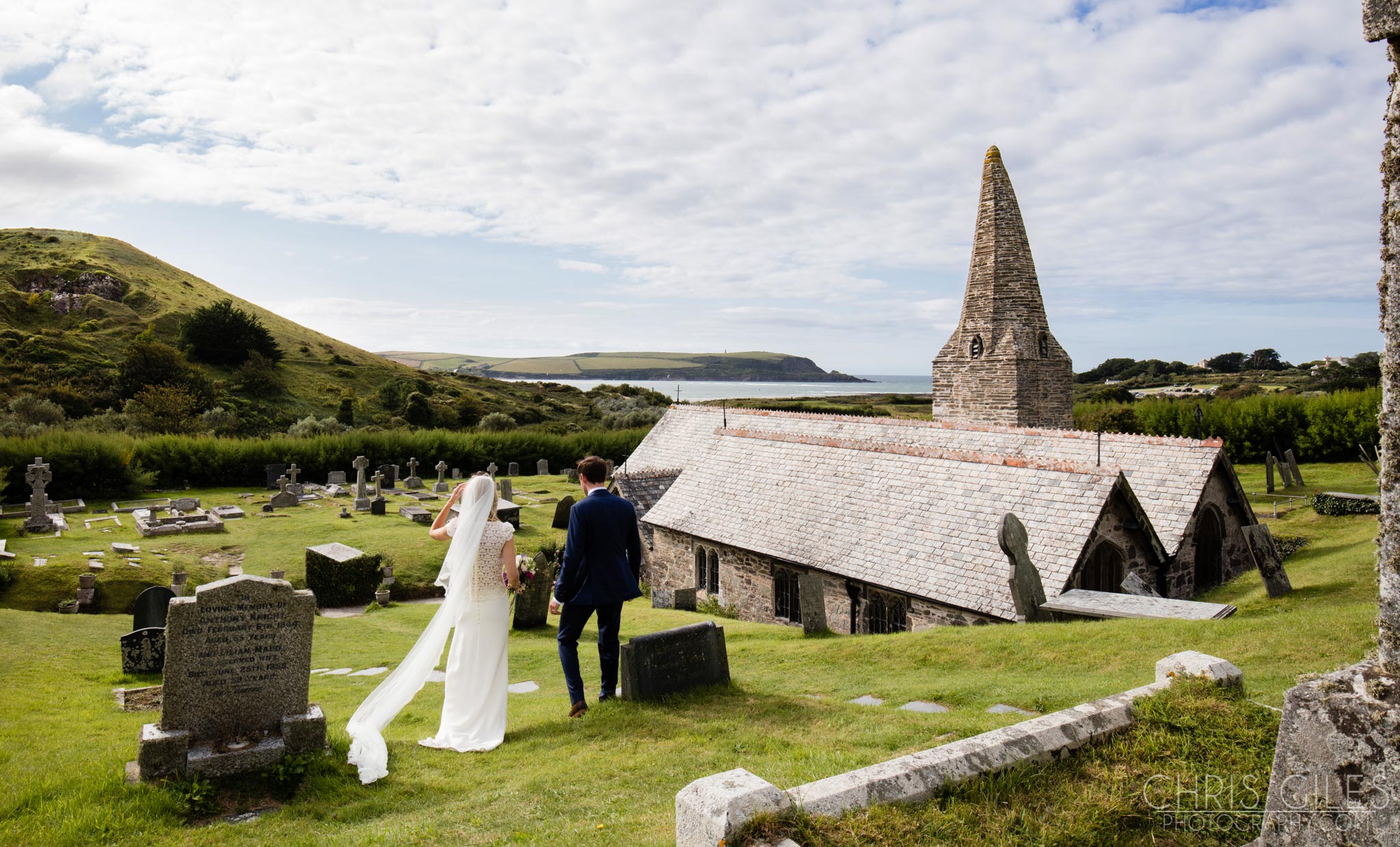 Certain parts of the UK have a special hold on my heart and Cornwall is one such place.

When my age could be counted in single digits Cornwall was a source of family holidays, tricking the Space Invaders machine to accept 2p’s at holiday camps in Camelford, pretending to be a rock climber in Tintagel and discovering jellyfish on Polzeath beach are moments that still hold a certain magic and nostalgia for me.

Yet, despite this I’ve not been back to Cornwall since, at least not until Domi and Phil booked me for their wedding at St Enodoc Church in Trebetherick. From that moment I had been counting down the day to my return….

Their wedding started unusually with the boys surfing at Polzeath beach while Dominique got ready at her parents in Rock.

St Enodoc church is honestly the most beautifully located church I’ve ever shot at. The view of St Enodoc aligns perfectly with the Jurassic Cornish coastline that leads to Daymer Bay.

After the ceremony we headed back to Domi’s parents for a reception in a Yurt where the September sun kept us warm. The speeches took place outside followed by a Conga to the beach.

Sometimes I get the chance to shoot for friends and I’ve known Kimberley and James from the very start of my career as a photographer. It made the day all the more special to me to be shooting for them.

I’d never been to Oakley Hall Hotel before but it has some tricks up it’s sleeve photographically. The cottage at the end of the lawn is very reminiscent of the house from the movie ‘Up!’ and the whole venue is surrounded by corn fields which at this time of year proved to be a great backdrop for the couple shots.

As Kimberley and James were getting ready in the same place I could float between them to cover both sides of their story, the reception was adorned with the biggest floral decor I’ve yet seen at a wedding and it was beautifully laid out.

In the evening ‘The Deloreans’ knocked our socks off and as I now stay later into the evening where I can there was some serious moves and interpretive dance on the floor right until midnight. If you are looking for a wedding band they were one of the best I’ve seen this year. So much energy! See more of their stuff here 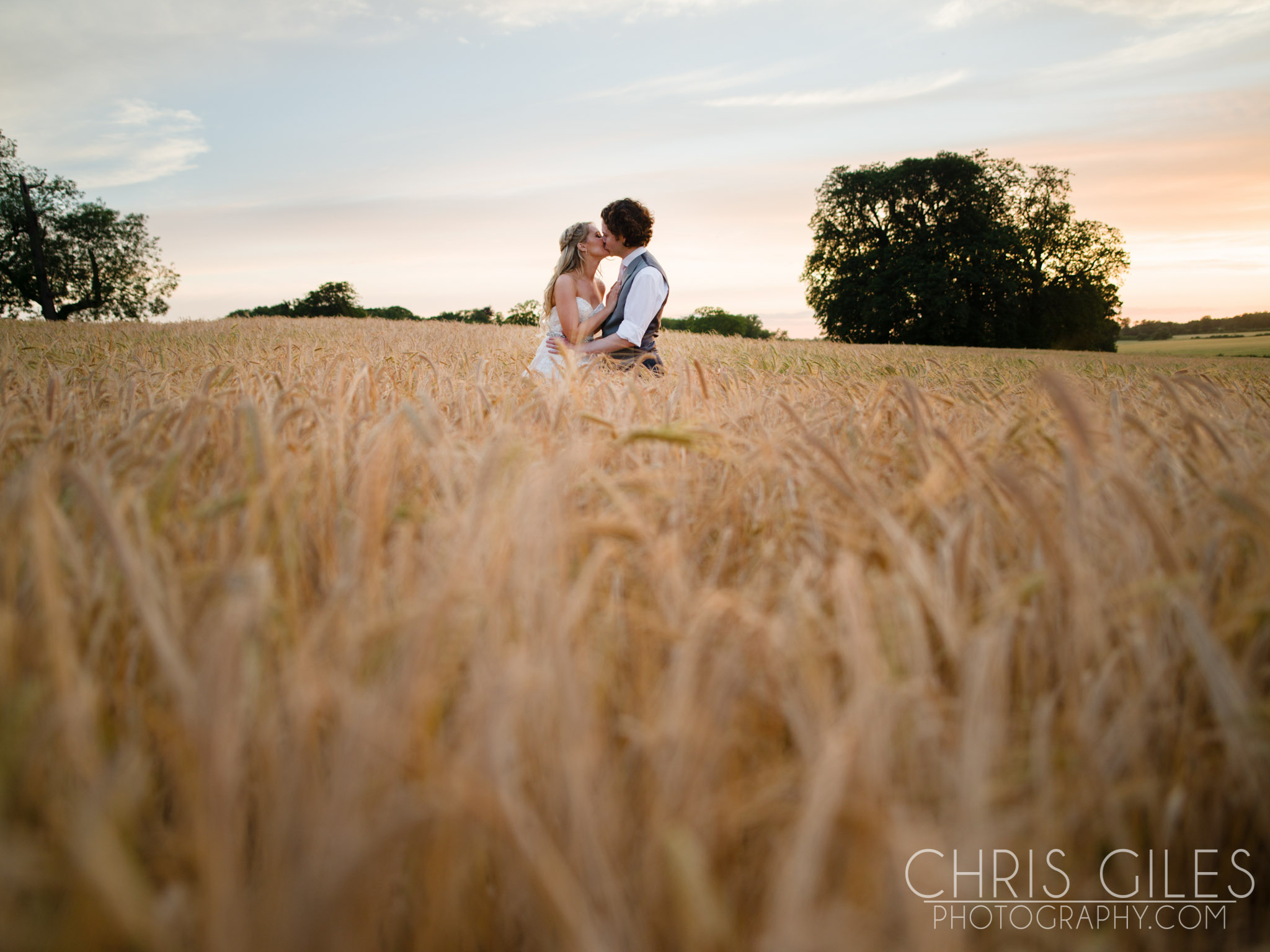 The dancefloor was never empty and it kept rocking all the way through until the end. It was such an epic day!

Here in the UK I don’t get many seaside weddings, which is a shame as I really enjoy the different landscapes. I love my countryside but a seaside location and a sandy beach is something I’d like to do more of.

Daisy and Chris got married at the Gallivant on Camber Sands. The venue is directly opposite the sprawling beach of Camber and is a beautiful area for photos.

Daisy got ready in the accommodation on site and everything took place there. The seaside feel was present throughout the day and their dinner was in the adjoining marquee.

As each year goes by I’m still surprised by just how much I can achieve in one wedding day. At Sophie and Lewis’ wedding we were spoilt for choice as far as locations go with Standerwick Court being his parents home.

So that’s 10 bedrooms and 70+ acres with exclusive use to be creative in. One room had a Spitfire battle painted on all four walls….Painted on the walls. How cool is that?

Beckington church, where Lewis waited for Sophie to arrive was typically west country cute as well. 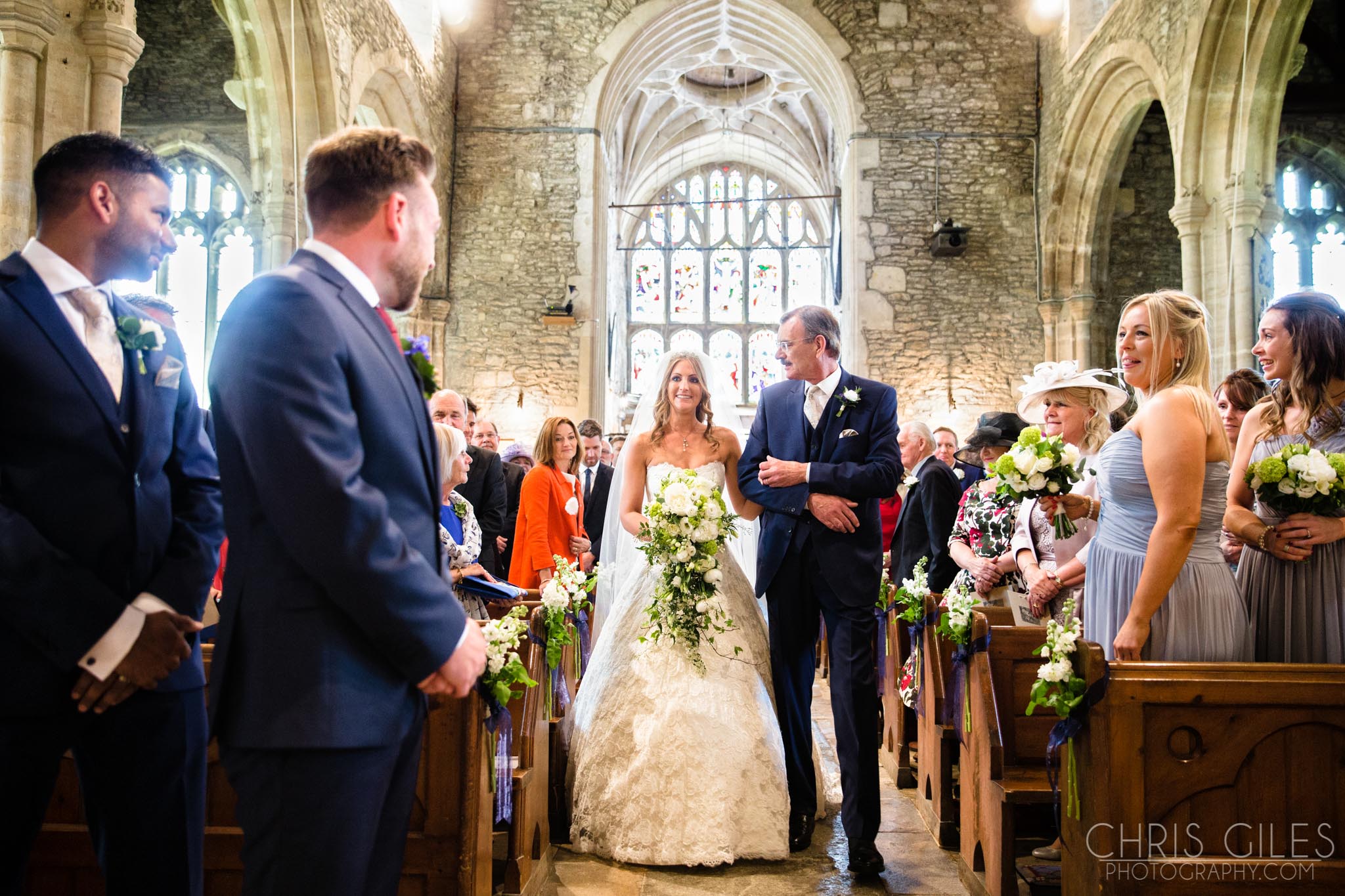 After the emotional ceremony they headed back to Standerwick Court in Lewis’ surprise transport of a horse and carriage, we stopped for photos, I was stung by nettles and my second Greg was with the rest of the guests being awesome.

A sweet marquee housed the reception dinner and after the final speech we partied hard until late with a few stops for shots at the folly and later, the outhouses where the moon popped out to greet us.

There was so much to say about their wedding that it would take away from the photos so I’ll stop, but leave you with this….

A great location and venue is brilliant but the right couple, friends and family are what made this wedding. These guys were out to party and they all did in their own way. 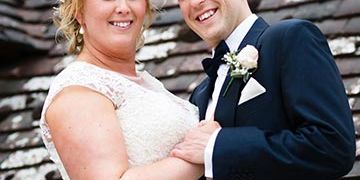 One of the biggest plus points of my job is being able to make friends with the couples I shoot. It doesn’t happen 100% of the time but a wedding becomes more personal when it does. It’s exciting to meet ‘your couple’ for the first time and a bit of a buzz when you ring their doorbell or see them across a noisy coffee shop.

You know you’re about to go on a journey with someone, you have no idea where it’s going to take you or what it’s going to be like…but you’ve a good idea already that it’ll be a blast and a time you’ll hold dear.
Here is Charlotte and Nick, they live in Haywards Heath but the wedding was at Pyecombe Village Church, Sussex and their reception was close by at Pangdean Barn.

Nick got ready at home while Charlotte was at the family home near the church. Because of the close proximity to everything they walked to the church with the guys meeting up at the Plough at the bottom of church lane.

My wife, soulmate and second photographer Laura was with the guys, Pete (the videographer) and I was with the girls and we followed them on to the ceremony. 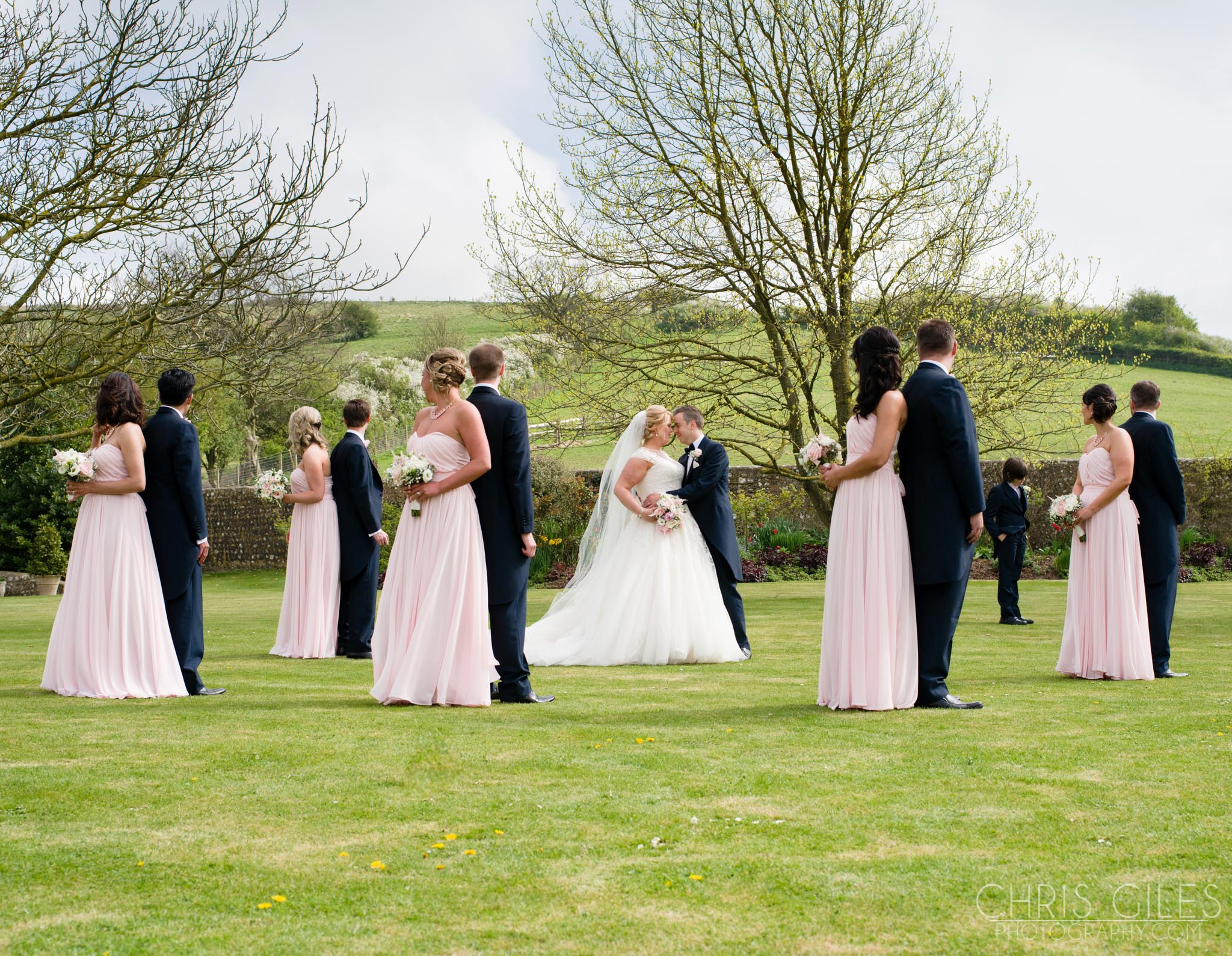 Pyecombe church is pretty special inside, well lit and cosy. A cute church and one which matched Charlotte and Nick. It was personal. 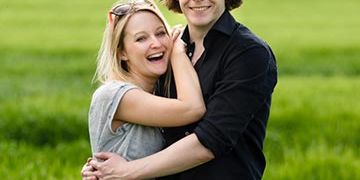 20 perfectly good reasons to have a couples shoot 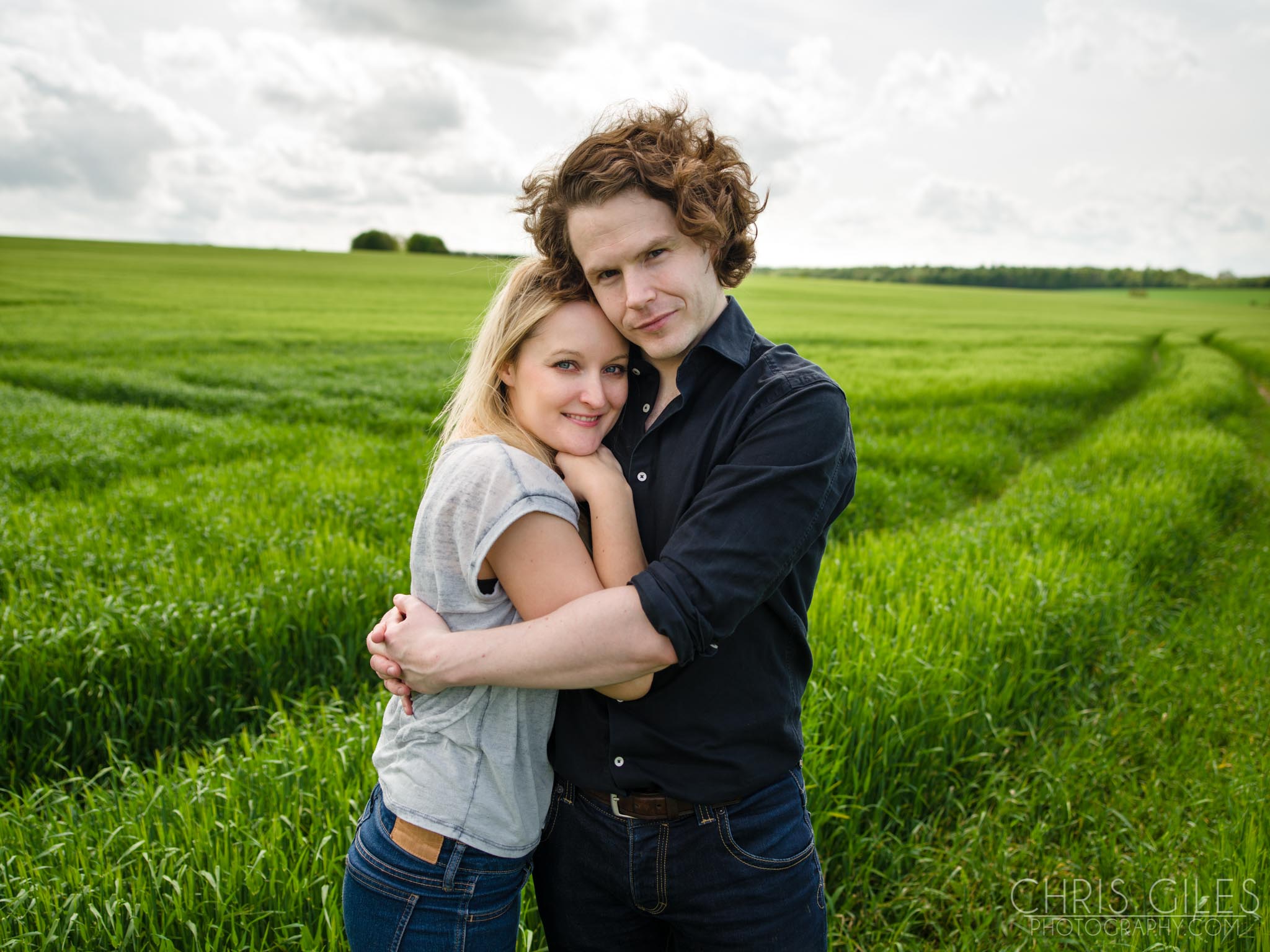 Above is one perfectly good reason to have a couples shoot (and below are the other 19). I used to call them pre-wedding, engagement, beloved or whatever shoots but in reality they all suggest being wedding orientated. Screw that. A bit like how valentines day shouldn’t be the only time you show affection to each other or how Christmas is the only time you see family. 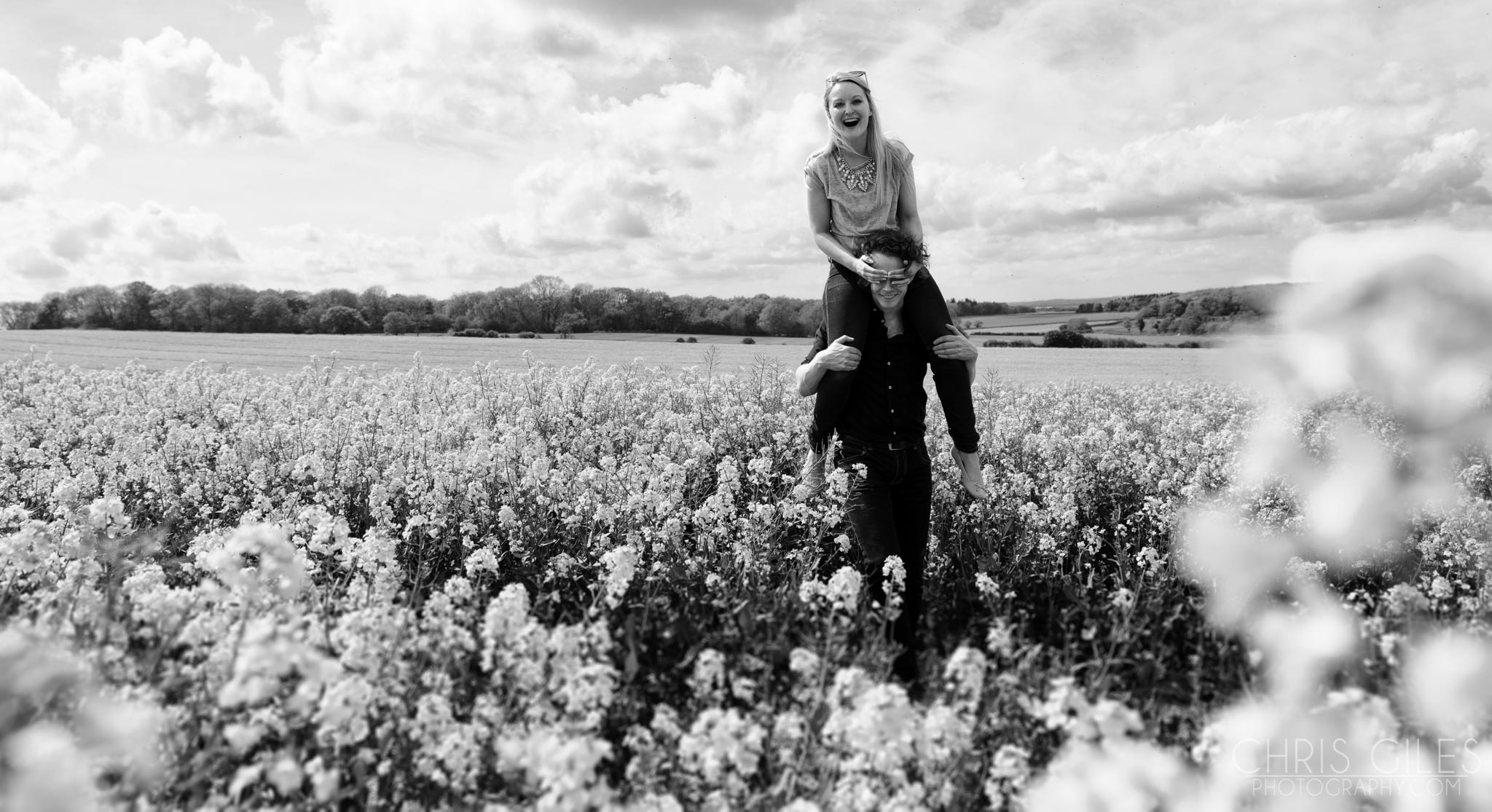 A couples shoot is a wonderful way of getting closer together, to zone out, put your phones away and enjoy each others company.

With Kimberley and James above it was a sunny day, we strong-armed ourselves into a couple of fields for photos. Admittedly, the height of the rape-seed was deceiving from the road and I had my comedy moments pushing through it (imagine a dog jumping through long grass…that was me). 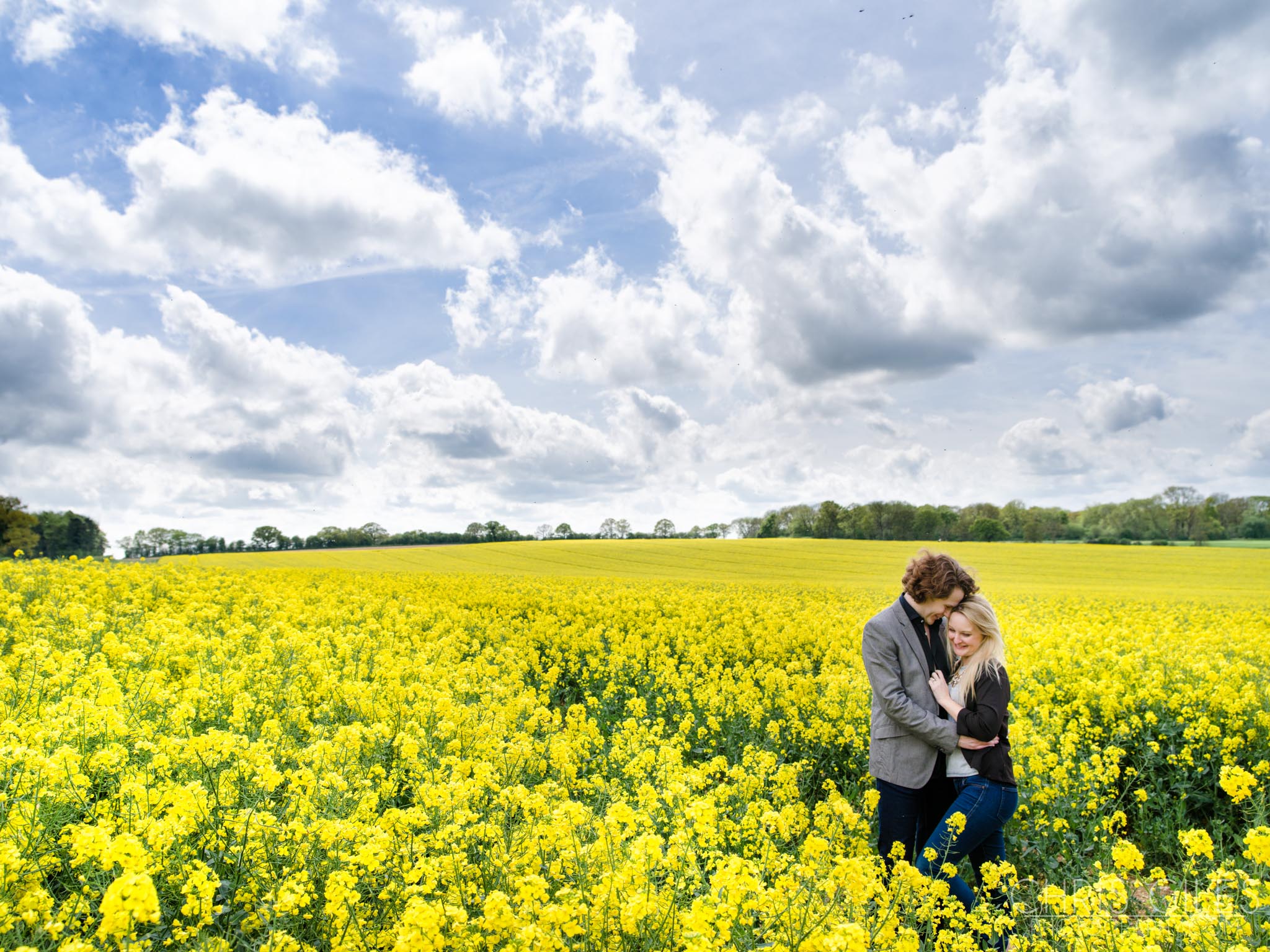 Kimberley needed help getting into field two (there was some nettles) so James and I pretty much launched her over, she screamed, we laughed and the shoot continued. 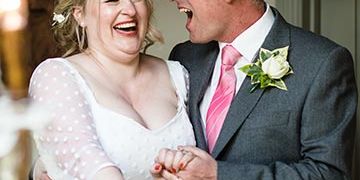 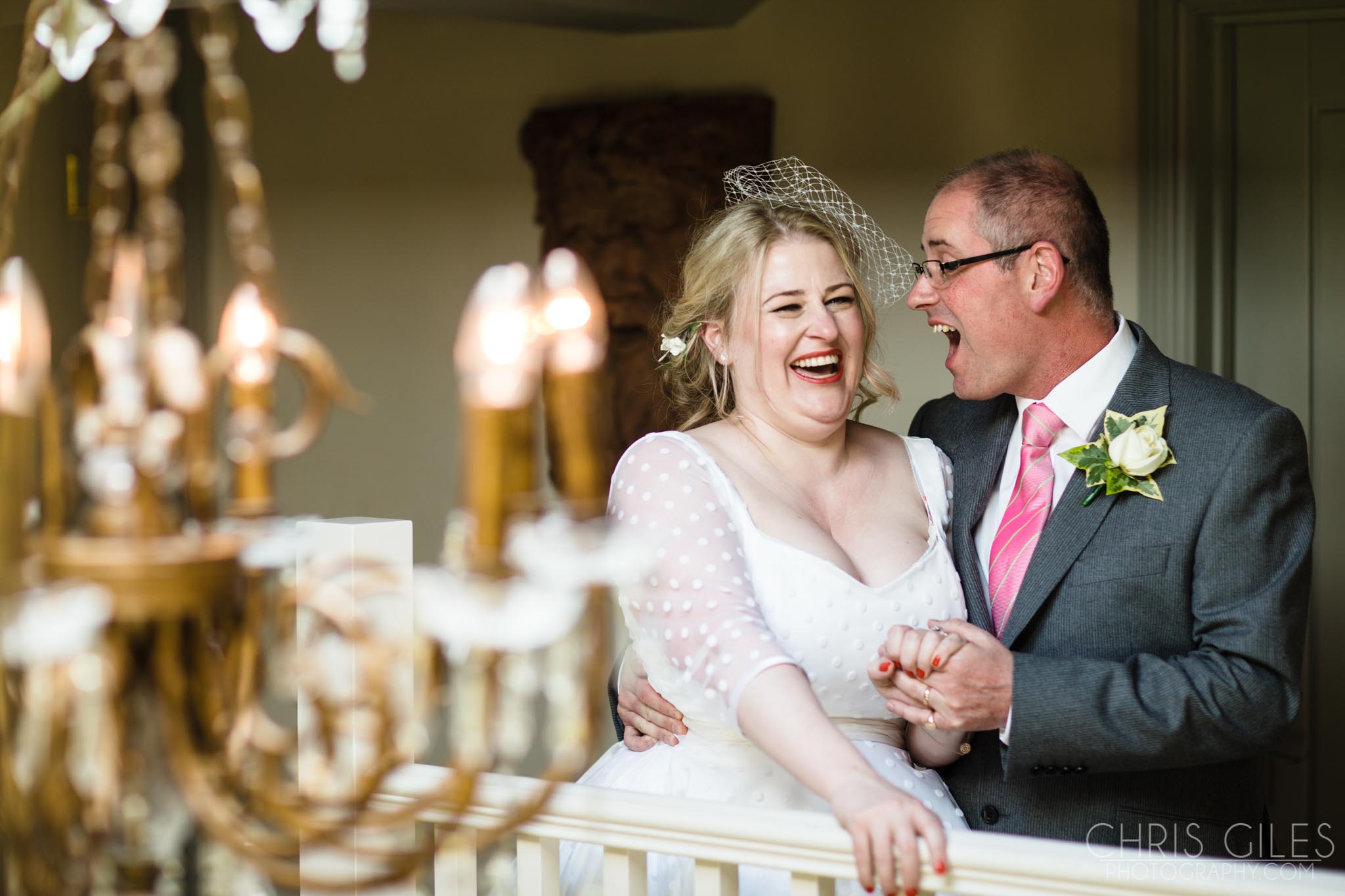 Todays show and tell is from Gemma and Chris’s mid April wedding in Keston. The day started with Gemma at the family home and once ready, we all walked down the road together to Herberts restaurant for the ceremony. This was a small and personal affair followed by lunch and a trip back to the house. This day was far from over though as 2 miles away there was a village hall ready and waiting for a massive party to take place!

At around 6pm everyone started to arrive at Keston Village Hall and soon it was packed out. A stage was used for speeches, there was dinner for everyone and the floor filled with dancing. As the hours ticked by there was stage diving, can canning, an attempt at a conga and one person fell down like a sack of spuds mid spin…which are all the signs of a really good night!

I totally loved the relaxed vibe a wedding like this brought. Due in part to Gemma and Chris themselves and all the lovely folks they have as friends. They really made the wedding what it was. 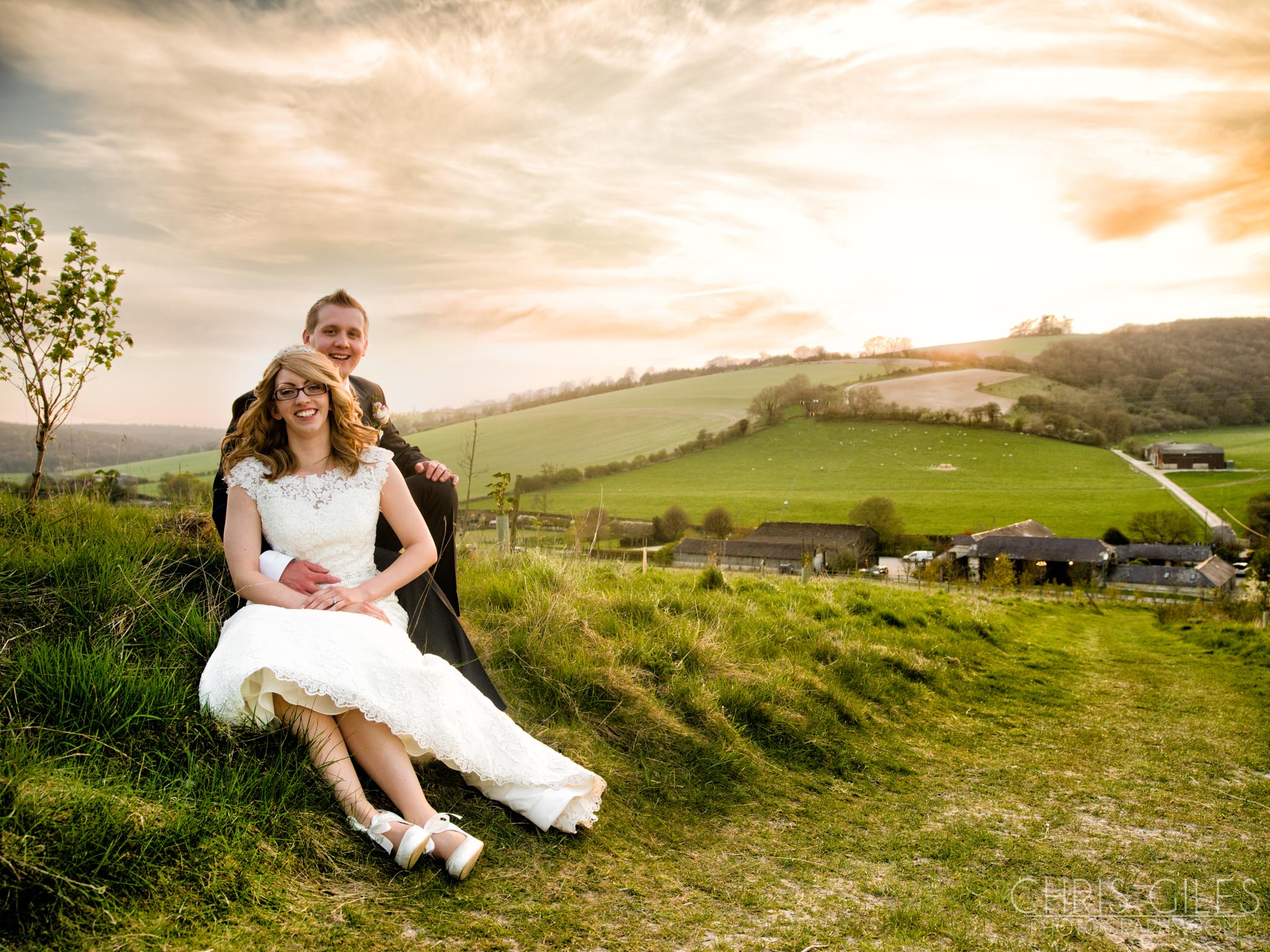 Here are some shots from Isobel and Jonny’s wedding at Upwaltham Barns this April. They were married on a Monday which is uncommon, but their first date was on the 20th, Jonny proposed on the 20th of April and so it followed that the wedding date needed to be the same too! 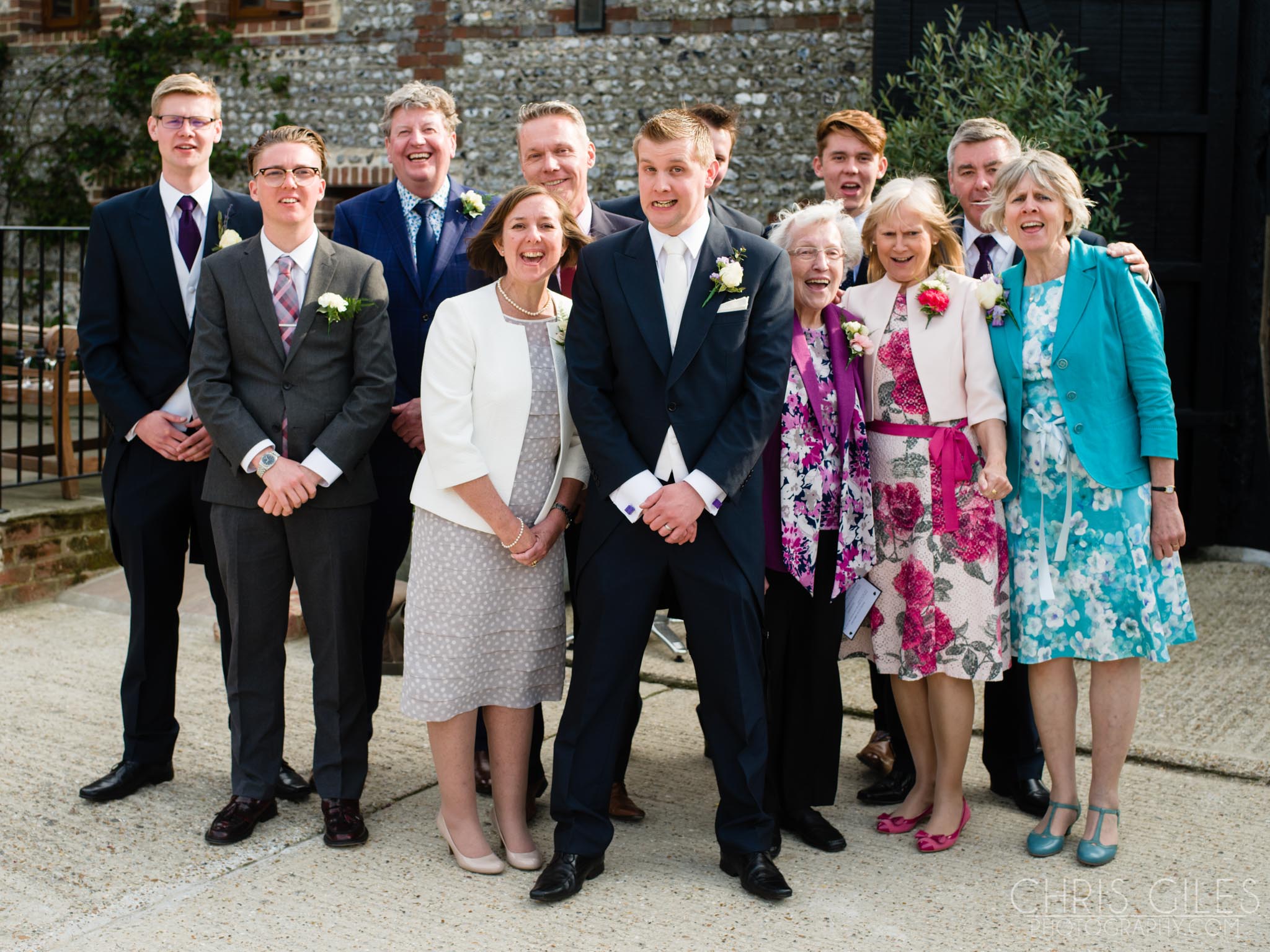 They both got ready with family at Flintstone Cottages (nearby in Aldingbourne)  and this served as a perfect starting point for the day.